124,671 BRENNAN members around the world 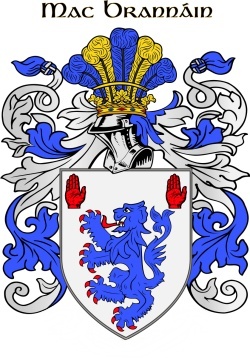 Design your own BRENNAN Family Crest

Mac Branáin - anglicised Brannan, Brennan, earlier M'Brenan etc. the root probably being a diminutive of 'Bran', probably for 'raven'.Ó Branáin- this name added by Woulfe in 'Sloinnte Gaedheal is Gall' (1923). From 'Bran' or 'raven'.

Of the first name there were several families throughout Ireland: of Ossory in northern Co Kilkenny, where they were chiefs of Uí Duach, and a numerous name there; of Crevagh in Co Westmeath, also numerous there; a family in the south east of Co Galway, influential and numerous at the end of the 16th century; Uí Bhraonáin of Dunkerron in Co Kerry.

Of the second surname we look to Co Roscommon to find the Mac Branáin family that anciently held considerable power in Corca Achlann. Legend has it that they were of druidic descent, but were friendly to the evangelising St Patrick! This name, like the two others, has long been generally anglicised as Brennan.

Woulfe (op. cit.) writes that Uí Bhranáin were ecclesiastics in Derry and Co Fermanagh. There may have been some confusion with the distinct surname Brannagan (Ó Branagáin).

From these disparate sources we would expect the surname Brennan to be widespread over Ireland.

Looking in the 1659 'Census' of William Petty, Cromwellian bureaucrat, we find under the appelation of 'Principal Irish Name' in that document:

Co Kerry
Barony of Trughanac, O Brenane 11; there are none listed in the Dunkerran Barony in the 'Census'.

I could find no trace of Ó Braonáin in the lists for Derry or Fermanagh.

By the time of the mid 19th century Griffith's 'Valuation' of households, the most numerous Brennan households were in the following counties: Kilkenny 648, Laois 365, Sligo 271, Roscommon 255, Mayo 233 and Wexford 148.

The arms opposite are self explanatory as to which family they apply. The Irish Times Ancestor website chooses and illustrates the following arms for Brennan: 'Gules, two lions rampant, combatant, supporting a garb all or, in chief three swords, two in saltire points upwards, and one in fess point to the dexter, pommels and hilts of the second: Crest: an arm in armour, grasping a sword, all proper'.

John Brennan (1625-1693) Archbishop of Cashel in this tubulent period.

Abbé Pierre O Brenan, executed by revolutionaries in France in 1794.

Tell us about any famous BRENNAN (or surname variant) you think we should add here. We will get our genealogists to check them out and add them to the list. Thanks!

Join the conversation with the BRENNAN tribe

looking for info on James and Ann Brennan. Born 1830's? May have been son Thomas, his son Thomas, my dad Richard, and me, Maureen. Ancestry says Lienster or Roscommon as ancestral places. Would appreciate any info! Thanks!

Any Brennan with a relative from Waterford, Ireland, living there in the early - mid 1900s?

My name is Ann Brennan my father was Harry brennan from maghera his father was Edward that's all I know any help would be grateful.

Hello everyone, I and my two brothers live in Plymouth in Devon England and our parents are both deceased, when they were alive my grandparants were farmenrs and lived in the Hoath area in what is now Northern Dublin, we are all over 60, there are lots of relatives scattered around Dublin. My mothers name was Elizabeth Byrne and we have contact with some of her brothers and sisters.

From whence came Sad beneath the shield?

Areas of Origin for BRENNAN

Write an email address and click 'Invite' to share this page with more members of the BRENNAN tribe.

Discover where the BRENNAN Family members live around the world

Show off the BRENNAN Family Crest…