104,317 BUCKLEY members around the world 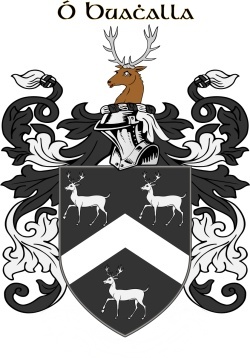 Design your own BUCKLEY Family Crest

Patrick Woulfe in his 'Sloinnte Gaedheal is Gall' ('Irish Names and Surnames' 1923) says that there is also a rare Mayo surname, Ó Bachlaigh, anglicised as Bockley and Buckley, from 'bachlach' or 'husbandman'.

Ó Buachalla was a sept originally of Co Offaly in the Middle Ages. There was also a sept in north east Co Cork at the same time. Both were dispersed by the Cambro-Normans.

Woulfe says that in the 16th century Buckley was peculiar to Cork, Tipperary and Offaly.

Buckley was the 99th most numerous name in the Registrar General's Report of the number of births of that year in Ireland.

Buckley is also an English name, the Barons Wrenbury in Cheshire and landed families in Castle Gorford et al. The name means 'buck (he-goat) and lea (clearing/wood), or in Devon: 'bow' + 'cliff'.

Tell us about any famous BUCKLEY (or surname variant) you think we should add here. We will get our genealogists to check them out and add them to the list. Thanks!

Join the conversation with the BUCKLEY tribe

I’m wondering where the Welsh town of Buckley, Flintshire, got it’s name.

My GG grandmother Margaret Elizabeth Buckley married my gg grandfather John W. Butler in the town of Bansha, South Tipperary. They had five daughters born in the Bansha area and baptized in the church in Bansha. The family left Ireland for the USA in 1853-54 and settled in New York. The youngest child Bridget apparently died before they entered the states. They moved to Ohio in 1860 and on to Iowa when John W. Butler retired from the railroad. Margaret Buckley died in Union Prairie, Allamakee County, Iowa on March 8, 1883 and is buried near their farm across from the Irish Catholic Church in Union Prairie Township. They had eight children, the last three born in the USA. Very interested in Buckley connections around and near Bansha, Tipperary.

My Grandfather was born in Colebrook Connecticut

when the great famine hit Ireland alot of irish emigrated all over some coming to england via wales they worked in the mines ect then spread across the country flintshire cheshire crewe lancashire?

hi my surname is buckley i have just put the o back on by deed poll ?

My Buckley family come from Cheshire England. I'd like to know when Buckley moved over to Cheshire

I've discovered that my ancestor William Buckley was descended from the black Irish in Cork Ireland, so called from the spaniards who traded with Ireland and mated with local women. The original spelling of the name was O'Bucchala If there are any Buckley in Ireland who've done family tree research I'd love to hear from them

(Part 1 of 3) The Buckley name has a long history in British Isles, but now DNA and some recorded history says their origin is from the Emerald Island. The Buckley story [dominated by DNA tribal marker R1b-L513, Subgroup B2] can trace their origins to the Finn Valley in Donegal, Ireland from 50 BCE. Perhaps the journey begins with the Clanna Dedad; Deda, son of Sen or Deda Mac Sin. The Buckley surname origin is from Clan Domnaill [DNA Tribe R1b-L513, Subgroup B1] and relations who remain in Ireland take the modern surname (O’)Donnelly, McDonald and Donohue in Ireland.

(Part 2 of 3) According to research, the Domnaill name is also found in Brittany, France. It is a very old name which appears in the 5th century Roman inscriptions as Dumnovellaunos in Brittany meaning “Deep Valour” equivalent to Irish Domhnaill. But how could this be? Recent discoveries from DNA testing are unlocking the migration patterns of Celtic tribes as late as 800 CE to 1200 CE. The Buckley story begins in pre-history Ireland then members of his family move to Wales where the family can be traced back to their Welsh tribe Cydifor Fawr. Many of his kin will then move to Brittany, France during the Dark Ages.

Areas of Origin for BUCKLEY

Write an email address and click 'Invite' to share this page with more members of the BUCKLEY tribe.

Discover where the BUCKLEY Family members live around the world

Show off the BUCKLEY Family Crest…