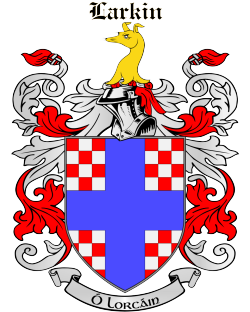 Design your own LARKIN Family Crest

The Ó Lorcáin were the main ruling family in Fothart (Forth) in south-east County Wexford before the arrival of the Anglo-Normans in the twelfth century. They were a Norse-Irish clan and were loyal sub-chiefs of Dermot MacMurrough, King of Leinster, even joining Dermot’s son, Donal in welcoming the first Norman mercenaries to land at Bannow in 1169. The Larkins had their headquarters at Carne on the south east coast and were still being praised by O’Heerin (d.1420) a learned historian and poet, a couple of centuries after the Norman settlements were established:

Hero of Fothart of the Carn,

A hero of good deeds with darts,

The affluent chief of O’Lorcain.

However, the power of the Ó Lorcáin faded as the new settlers took control of their area. In Sir William Petty’s ‘Census’ of 1659, the name Larkin (or one of its several variants) is listed as a Principal Irish Name of households in the baronies of the following counties:

The 1659 ‘Census’ returns for Co. Galway have not survived.

Larkin, James was born c 1883, the son of John Larkin and Kate O’Neill who had been married in St Catherine’s church, Murrintown, Co. Wexford in 1882. His known siblings were Bridget (b. c.1885), Catherine (b. 1890), Leo (b. c. 1892), Mary M. (born c. 1894), George (b. 1895) and Patrick (b. 1897). Kate died 2 days after Patrick’s birth and John remarried two years later to Catherine Long. In the 1901 census, the family was living at Sallystown, Killinick, County Wexford, the home of James’ mother, Kate O’Neill. His father was a farmer, a member of Wexford Rural District Council, and was closely associated with the Wexford Meat and Bacon Supply factory, later known as Clover Meats.

About 1903, James Larkin joined the Royal Irish Regiment (Service No. 8120) and was sent to India. In 1910 he retired to the reserves and moved to Australia. At the outbreak of WW1, he was recalled to active service in Brisbane and took part in the New Guinea campaign.

He returned to the Royal Irish Regiment’s base in Clonmel in early 1915 and then proceeded to the European front, calling in on his family in Sallystown en route. On 24 May 1915 he was the victim of gas poisoning in an engagement near Ypres and died while being removed to the base hospital on the same day. He is buried in Vlamertinghe Military Cemetery in Belgium. In his military will he left all his due pay to his brother, Leo Larkin.

Larkin, James William (Finian) was born in Rathumney, Gusserane, Co. Wexford in December 1899, the son of Nicholas Larkin and his wife Sarah Kinsella. He was educated at St. Peter's College, Wexford and Propaganda Fide College, Rome and was ordained as a priest of the Augustinian order there in 1927, taking the name Finian.

He spent the greater part of his life overseas, mainly in Australia. His apparently relentless energy led to the building of many churches, schools and parochial houses in North Queensland. He was also partly responsible for the founding of Villa Nova College, Brisbane.

On his return to Ireland, he spent five years attached to the Drogheda Augustinian Priory before becoming prior of the Augustinian church and community in John’s Lane, Thomas Street, Dublin. He died suddenly, aged 62, on 30 September 1962 during the centenary celebrations of the John’s Lane church.

I am the youngest great grandson of Patrick Larkin, born in County Roscommon in 1832. Accordingly to family lore, he travelled by ship to New York City with an older sister when about 15 years old, but they lost each other on the docks after landing. He went on to marry Joanna Healy in Dunkirk NY on the shores of Lake, and they had 6 sons - William James [my grandfather, born April 1862], Daniel Lucien, Charles, Thomas, Minor and a boy Laurence who died quite young. My father, William James Larkin, Jr., was born in Chicago in 1890. There was also a family tale about some of the Larkins stealing sheep back in Roscommon - but the who didin't!

My ancestor Peter John Larkin b:1839, married Eliza Ann Beattie b:1849, date and place unknown. Trying to trace her parents. Can anyone help - please.

My ancestor was Thomas LARKIN born about 1802 in County Monaghan. I suspect that he was from the Townland of Drumboat, Inishkeen, Co Monaghan. I also suspect that his mother's maiden name was HENRY. He married about 1838 or so to Ellen McGOUGH also born County Monaghan. Their first child was born in Ireland about 1839. This family emigrated to the state of Rhode Island in USA in 1841. They arrived port of NY on 26 May 1841 from Liverpool, England on ship "Gondola". They had an additional 6 children born in Rhode Island. Thomas Larkin was a teamster by occupation and maintained horses on public land. His first son born 1844 my great grandfather, became active in freedom for Irish Catholics back in Ireland. His name was James Wilson Larkin and he was elected to public office in the city of Pawtucket. He was a Major in RI state militia and became an honorary Colonel of his regiment and led the 1890 military parade in Pawtucket, listed in the pamphlet of the Centennial celebration of Samuel Slater Cotton Mill. He was a member of the Knights of Columbus. When a young man, Col. Larkin was prominent in the Fenian movement in this state, and was the treasurer of the local committee.

Hello my great granda was peter Larkin married to ann McCabe this was around 1860 , places in Ireland they are both from are shankill Monaghan . And corduff married in 1864 . They have 11 children one being my granda louis Larkin born in armagh county down 1926 ..he moved to London and married my name 1946 in wandsworth. He died 1995 . Just wondering if there is any larkins related to or cousins about

I am trying to trace the Larkin family I have William Joseph Larkin born 11 Nov 1903 in Waterford, his parents were Thomas Joseph Larkin and Ann Coughlin. Thomas is stated on the 1939 census in Bristol as being born on 22 Jun 1872 but can find no verification of this, he dies in Bristol, England on 23 Mar 1961 but does not state his birth date Thomas was a Grocer and on his marriage certificate it states that his father is John Larkin a Carpenter I can find no birth or death for him , but was told he may have come from Tipperary, I found a marriage in 1869 of a John Larkin to a Johanna Connelly 1869 in Kilkenny but don't know if this is the right couple, I know I need some help thanks Jenny

Areas of Origin for LARKIN

Write an email address and click 'Invite' to share this page with more members of the LARKIN tribe.

Discover where the LARKIN Family members live around the world

Show off the LARKIN Family Crest…