14,927 QUINN members around the world 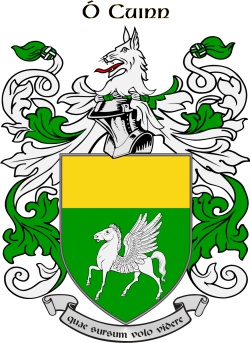 Design your own QUINN Family Crest

Ó Cuinn - anglicised as Quinn and Quin means descendant of Conn. The name means perhaps 'chief', 'sense', or 'freeman', according to different authorities.

The legendary 2nd century Conn Ceadchadach ( Conn of a hundred battles) founder of the Connachta, and thus the name of the province of Connacht, may be the eponymous ancestor of any of the following distinct Quinn septs: of Cineál Eoghain in Cos Antrim, a sept of Cineál Eoghain in Donegal, another sept of the same tribal grouping in Tír Eoghain in present Derry; others flourished in Longford, Sligo, Mayo, Clare and Tipperary.

In the 1659 'Census', undertaken by Sir William Petty, Commonwealth surveyor, the name appears as a 'Principal Irish Name' in counties:

None found in Co Donegal

None found in Sligo. Mayo is missing from the 'Census'.

In the Registrar General's 'Special Report on Surnames...'(1894), based on birth registrations in 1890, Quinn had the 19th highest order of incidence, and was most frequent in Dublin, Tyrone, Antrim, Roscommon and Galway. It was the most numerous name in Tyrone. The totals were: Quinn (349) and Quin (58).

Augustin Ua Cuinn, chief Brehon judge of Leinster, died of the pestilence, along with many other notables in Ireland and across Europe, as recorded in the Annals of the Four Masters for the year 1095.

'Etain, queen of Munster, daughter of Ua Cuinn, who was on her pilgrimage at Daire, died after her victory over the world and over the demon', Annals of Ulster, 1188.

Thomas O Quin, a friar minor, was consecrated as Bishop of Clonmacnoise, in Rome in 1253, as recorded in the Annals of the Four Masters.

Tell us about any famous QUINN (or surname variant) you think we should add here. We will get our genealogists to check them out and add them to the list. Thanks!

Join the conversation with the QUINN tribe

My Quinns came from kilkeel down to Liverpool

Looking for the Quinn family I believe located in Spittle or Galway. My parents (John Quinn) mother(Anna Dora Kelley) I was told lived in County Cork. Interested in finding heritage of my family. Other relatives last names Gorrivan, Coyne, Fenney

John Quinn perhaps from Galway or Dublin with relatives in Tyrone and Cavan. He had a daughter who was born in Liverpool, Lancashire, England and her name was Mary Ann Quinn. Also, he may have had a brother James Quinn.

I am looking for my great-great grandfather John Quinn who was perhaps born in Galway in either late 1700's or early 1800's . May have relatives in Tyrone or Cavan Ireland also. He went to Liverpool, Lacashire, England and had a daughter by the name of Mary Ann Quinn who is my great-grandmother,

Quinn - why only the famous? Mine certainly were not! I would love to know where the Enniscorthy Quinns lived prior to Enniscorthy and 1800’s but have already been told it is impossible to trace my Quinn family - yet Ive been able to get back further than a lot of people researching Irish ancestry. . My Quinns are from Enniscorthy, County Wexford, today and back to early 1800 John Quinn. Johns son James Q married Bridget Redmond (1825bn) c1844 NLI - daughter of James Redmond and Kitty Kavanagh married Enniscorthy 1811 (NLI) Their son Thomas Quinn c1850-1939 married Elizabeth Brien Thomas daughter Mary Eliza Quinn, my Grandmother 15/1/1897 Enniscorthy, (family in 1901/1911 Census Shannon Hill Urban) married England 20/12/1923, died Slough England 1988 . Thomas son Francis known as Frank married Annie Dixon - fought wars in many places overseas and their descendants still live Enniscorthy today Thomas son James bn 1886, started as a cleaner and was in the Irish Guards went to war - was wounded (shell shot) in France and returned to either England or Enniscorthy. He did definitely return to Enniscorthy soon after and then left again (family said to America? Never to be heard from again - his Uncle Patrick Ann Quinn is still alive but a very sick man who would love to know what really happened to James. Patrick has just done DNA testing in an effort to try to find descendants of James. My Mother only knew her Mother and Frank but had no other information on the Irish family at all. Unfortunately mum passed away 4 years ago age 91 and I only found my Enniscorthy family in June this year. My brother and I have also done DNA testing so I know where we connect up with the other Quinn strands in Enniscorthy and have shared this information with my family connection. 23andme say my famous ancestor is Benjamin Franklin and Bono lol. FTDNA dont offer this. I tested at both sites. Kind regards Carol

Anthony, please stop being so patronizing. It is BC and AD.

(Part 1 of 3) The Quinn name has a long history in Ireland, but now DNA and some recorded history says its origin is from the south-west region of the Emerald Island. The Quinn story [dominated by DNA tribal marker R1b-L513, Subgroup O2] can trace their beginnings to what is now County Kerry from 50 BCE. Perhaps the journey begins with the Clanna Dedad; Deda, son of Sen or Deda Mac Sin. The Quinn surname origin is possibly a branch of what will become the Dáirine [R1b-L513] who are found in south Ireland around 300 CE.

(Part 2 of 3) According to research, the Dáirine will join with the Dál Riata of north-east Ireland and invade Scotland around 500 CE. But how could this be? Recent discoveries from DNA testing are unlocking the migration patterns of Celtic tribes as late as 800 CE to 1200 CE. The Quinn story begins in pre-history Ireland but many of his descendants will then move to Kintyre, Scotland where they and other R1b-L513 members will form the Dalriada. This line and many of his kin will then travel to Brittany, France during the Dark Ages.

Looking for relatives of Matthew, Frank and Molly Quinn who emigrated to America early 1900s. Their father was a magistrate, I believe named Frank also - mother was Ellen Kelly. They were from close to Galway, I think. There was another brother who also immegrated and died young.

Areas of Origin for QUINN

Write an email address and click 'Invite' to share this page with more members of the QUINN tribe.

Discover where the QUINN Family members live around the world

Show off the QUINN Family Crest…